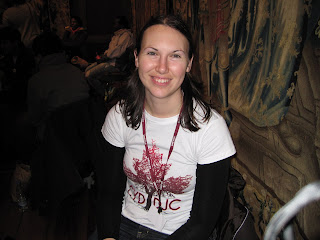 This post was written originally for Canadian Geographic magazine’s blog

Copenhagen– A giant orb glows in a major city square, while in another part of Copenhagen, new steel cages await unruly protestors. Denmark’s capital is prepped for the Monday’s kickoff to 12 days of United Nations climate negotiations.
On Sunday, I sat down with Amber Church, the national director for the Canadian Youth Climate coalition, to get her take on the Canadian negotiating team for the next two weeks.

The 28-year-old calls Canada a “lost lemming” in the global climate negotiations, which has even fallen behind the U.S. with its inaction.
“Right now Canada is not leading—it’s not even following very well because Environment Minister Jim Prentice’s line is ‘We can’t do anything until the U.S. does something,’” Church says. “To be perfectly honest, the U.S. is ahead of us and we’re not even following very well.”

Her advice for Canada in Copenhagen? “Canada should lead, follow or get out of the way,” Church says.

Church, who lives in Whitehorse, will be leading the Canadian youth delegation at the talks. The delegation is composed of a 35 activists from around the country, making up one of the largest youth delegations at the conference. This doesn’t count another 50 or so more Canadians who are attending with student delegations from universities such as the University of Toronto.

Church says the Canadian youth will lobby hard for strong reduction targets, holding the Conservative government’s negotiating team accountable for not supporting a climate bill earlier this year in the House of Commons, which called for certain emissions reductions.

“The Canadian public along with the House of Commons supports these targets and so we’d like to make sure our government is actually speaking for our people.”
With this goal in mind, Canadian youth will be meeting with a growing list of Canadian politicians while in Copenhagen, including Prentice, NDP leader Jack Layton, Green Party leader Elizabeth May, environment ministers from the territories, and Canada’s chief negotiator, Michael Martin.

A meeting with Prime Minister Stephen Harper is still in the works.

Church said these lobbying sessions with politicians will not be soft photo-ops, since the Canadian youth will be driving home their message, Church says.

Check back soon for more developments on the Canadian youth delegation in Copenhagen.

Liana B. Baker, a former intern with the magazine, is Canadian Geographic climate policy correspondent in Copenhagen.